27 October 2018 was Black Cat Appreciation Day. I am a long-time lover of black cats (and dogs) and am always upset by the fact that Black cats (and dogs) are less likely to be rehomed than other colours. Why? It seems that one of the more recent reasons is that they (allegedly) don’t look so good in selfies (of course, I disagree, but then, I am totally biased). Or is that their connection with witches and bad luck persists? 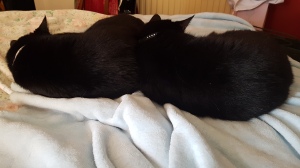 In Ancient Egypt, up to about 310AD, black cats were considered to be far from unlucky. All cats were considered to be sacred an worshipped. In fact, they were believed to be descended directly from the Gods. That is clearly a genetic trait that has passed on, at least to my cats, who expect that same level of adoration and are relentless if I don’t deliver the goods.

In medieval Europe, perhaps because of their nocturnal nature, cats were believed to be associated with witches and the supernatural. In Christian cultures, white is the colour of good and purity, black is the colour of the dark side…

At around this time in Europe, witch-hunting was big business (a story for another day but women – it was generally women – who were accused of witchcraft were damned if they did and damned if they didn’t. In England, they were put is a ducking stool, and plunged into a pond. If they survived, it was considered to be proven that they were witches, and they’d be burned alive, their cats with them. If they drowned, they were innocent, although too late for them.

As if all that wasn’t enough, in 1233AD, Pope Gregory IX (who had clearly been a mouse in a previous life) declared that black cats were an incarnation of the devil! The Christians (hmm, struggling with this a bit, seems a contradiction to me) gathered up all the black cats they could find and burned them alive at village festivals.

There were a number of other beliefs about black cats and witches, perhaps the most common being that they were “witches’ familiars,” and helped them in their pursuit of witchcraft. (Trust me when I tell you this is not true. Many, many times, I have pleaded with my black cats to magic me a shed load of money. I am still waiting.). They were also believed to be in touch with the underworld because they went out at night. Again not true. My girls curl up and that bed and only budge when I move.

And in some places, it is different

I was brought up to believe it’s good luck when a black cat crosses your path, which is also true in Japan and there are other places where they are believed to bring good luck:

In my house, cats rule, not just the black ones, although my personal belief is that black cats have a louder purr than others (I used Titan’s purr as my ringtone for many years). If you can’t love them, don’t be cruel to them.